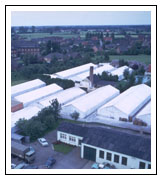 Prior to the 1970s, Holtkamp Greenhouses had a presence in the United States only through its licensed propagators which grew and marketed African Violets under the Rhapsodie trademark. All this changed, however, when Reinhold Holtkamp, the son of Hermann Holtkamp, Sr., set up operations in Nashville, Tennessee. Soon after, Reinhold introduced an entirely new trademark of African Violets. Barely a decade later, this trademark would represent the most recognized name of African Violets in the world. This trademark is, of course, "Optimara."

Introduced in 1977, the Optimara name is derived from two words: optimum (meaning the best) and Usambara (the mountains in East Africa where the African Violet was first discovered). From the beginning, Holtkamp Greenhouses USA set out to make Optimara Violets as easy to grow as they were beautiful. To do this, Reinhold Holtkamp did two things. First, he set up a new R&D facility which, while working in cooperation with R&D in Germany, could also move in new directions. Second, he began to develop a full line of plant care products designed specifically for African Violets.

With the blessing of nearly 50 years of African Violet research for its foundation, the new R&D facility, at Holtkamp Greenhouses USA, began work with an undeniable advantage. Nevertheless, Optimara could never have grown as rapidly as it did without the good instincts and untiring efforts of its president and chief researcher, Reinhold Holtkamp, Sr. In an age when corporate heads are rarely found beyond the safety and comfort of their offices, Reinhold was literally getting his hands dirty (which he still does). As a result, Optimara soon had over 100 new varieties and, beginning in 1986, was able to debut its miniature "Little Indian" series and super miniature "Little Jewel" series. During this same period, Optimara began crossing all their varieties with an extraordinary, new characteristic called semper-florescence, or continuous blooming. As the name suggests, this characteristic gives Optimara Violets the ability to bloom non-stop.

Perhaps one of the most exciting projects, originating from Holtkamp's research and development in Nashville, is the "Space Violet" program. In 1984, Holtkamp Greenhouses launched 25,000 Optimara seeds into space on one of NASA's space shuttles. The seeds remained in space, orbiting the Earth, for nearly six years. (The Long Duration Exposure 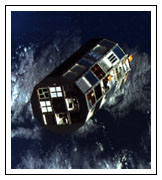 Facility, on which the seeds orbited, is shown at right.) The program was conceived to test the effect of long-term exposure to cosmic radiation and lack of gravity. When the seeds were retrieved in 1990, many mutations soon became apparent. While most of these mutations are still being developed, some have already been crossed with Optimara varieties. One such mutation has resulted in a new characteristic called multiflorescence. This characteristic gives Optimara Violets an extraordinary abundance of flowers which never stop blooming. Compared with PMA standards, which define a finished African Violet as having five to seven open blooms, a multiflorescent Optimara variety will have at least 20 open blooms. (For more about Space Violets, read about the EverFloris series.)

Aside from the Space Violet program, some of Optimara's more exciting projects include the introduction of many new series. Among these are the World Traveler series, the Victorian Charm series, the Artist's Palette series and the Little Dancer series. The World Traveler series is comprised of extra large, 6-inch Violets which are named for major cities around the world. The Victorian Charm series features a number of standard, 4-inch Violets with variegated leaves. Each variety in this series is named for a virtue reminiscent of the Victorian era. The Artist's Palette series features standard, 4-inch Violets which are characterized by large flowers with splashes of color. Each variety in this series is named for a famous painter. The Little Dancer series is comprised of compact, 3-inch Violets. Each of these varieties is named for a well-known dance style.

While work in Holtkamp's R&D-Nashville has continued to make Optimara Violets ever more beautiful, it has also made them easier to grow by isolating those traits which would make Optimara Violets grow faster and more resistant to environmental stresses such as temperature variations and improper cultural practices. While such characteristics are not always as readily visible as an Optimara Violet's big, colorful blooms, they are nonetheless integral to what makes an Optimara Violet "simply" beautiful. With this in mind, the development of Optimara plant care products was really just an extension of what Holtkamp Greenhouses has always sought to do in their hybridizing efforts.

Beginning in the 1980s, Optimara began to introduce a line of plant care products specifically designed for African Violets. Because of the special needs of African Violets, the development of Optimara plant care products was viewed as an important contribution to the industry. With more than half a century of research to guide them, Optimara was in an unique position to develop products that would make it easy for anyone to grow beautiful African Violets. Among the most important products which Optimara developed was a Violet Food with a precisely balanced formulation to produce full-blooming African Violets with vigorous roots and strong, green foliage. The 14-12-14 NPK was derived from years of analyzing the growth and performance of African Violets at Holtkamp Greenhouses, where the same formulation continues to be used. While cheaper sources of nutrients were available, Optimara chose higher grade sources in order to eliminate harmful impurities, such as urea, which is known to cause root burn on African Violets.

Another important plant care product which Optimara introduced was their potting soil. Because it is often thought of as nothing more than dirt, the importance of a good potting medium is frequently underestimated. Perhaps this is because many potting soils marketed for African Violets are, in fact, nothing more than dirt. Such potting soils, however, can be extremely harmful to African Violets. Because they tend to be heavy and hold too much water, they can literally crush the tender roots of African Violets and leave the plant susceptible to such deadly pathogens as Root Rot and Crown Rot. In addition, many potting soils are often too acidic, thereby stifling an African Violet's ability to absorb nutrients. For these reasons, Optimara developed a soilless potting medium comprised of block-harvested, sphagnum peat moss. To this, a small amount of calcium carbonate was added to adjust the pH to the proper range of 5.8 to 6.2. As a result, Optimara Potting Soil provides African Violets with an ultralight medium that encourages the proper absorption of water and nutrients.

Some of the most popular items in the Optimara plant care line are the many innovative self-watering devices. Each of these devices uses the phenomenon of capillary action to draw just the right amount of water into the soil. This greatly reduces any chance of either underwatering or overwatering. One such device is the Optimara Watermaid. The Watermaid stores water in a saucer from which it is drawn into the soil via capillary matting. The Watermaid gives African Violet growers a measure of versatility by accommodating pot sizes up to 5-1/2 inches. Other Optimara self-watering devices use capillary wicking to draw water from an enclosed well. These include the Optimara MiniWell, for 1-inch super miniature varieties, and the Optimara MaxiWell, for 4-inch standard varieties. The latest self-watering innovation from Optimara is the Optimara WaterShip container for 2-inch miniatures. The WaterShip container is not only self-watering, but spill-proof. This feature allows Optimara Miniatures to be shipped with water.

The Future of the World's Most Popular House Plant

Among the projects, currently underway at Optimara, are the development of a yellow and true red (or crimson) African Violet. Both have eluded the best efforts of researchers for years, and the development of either one would represent a monumental achievement. About every other year, rumors surface that someone has finally done it. However, all of these rumors have either proven unreliable or have been based on very limited successes. A true yellow or red African Violet will only be achieved when such a variety has been stabilized over a period of three or more generations. While such an achievement will very likely be years in the making, it is one which Optimara is confident of accomplishing in the very near future.

Whatever the future holds for Optimara, it is sure to bring something new and exciting to the world of African Violets. As it was in the early years of Holtkamp Greenhouses, everything that Optimara does, now, is setting the foundation for whatever breakthrough comes next. And even if nothing else is certain, we at least know that someone at Optimara will be getting their hands dirty. After all, the future of Optimara is not set in stone. It is, in fact, set in about 12 ounces of potting soil precisely formulated and pH balanced for the most popular house plant in the world.

For more information about Optimara research and development, contact your Optimara representative or send e-mail to sales@optimara.com.